Here you will find articles written by our wonderful team of doctors.

Just like in the movie, The Sound of Music…
“These are a few of my favorite things”…

I wanted to share with you some of my favorite products that we carry. Some of these you can get over the counter at Pana Animal Hospital
as long as you have a current yearly exam on file. We also carry name-brand, non-prescription food and treats, toothpaste and toothbrushes
along with a variety of other goodies! Stop in and say hi, weigh your pet for free anytime, and check out some of “my favorite things!”
We would be happy to answer any questions and get you literature/brochures on any of our products.

We have numerous cats that are back to playing like kittens because of the Cosequin joint supplement.
Also, we have had great results combining the Omega 3 capsules and the Alenza chews as an
alternative to NSAIDs to manage arthritis! Ask me how to best manage pain and arthritis in your pets today!
Have a happy holiday!
--Kiley Mettendof, DVM

Q: How did you become involved in animal chiropractic?
A: I had a couple of horses that had back and hip pain, and my dad took them to an equine chiropractor when I was in high school. I was fascinated by how well they responded to the treatment.
Later, I saw a booth at a veterinary conference during vet school for Options for Animals College of Animal Chiropractic and knew I was interested!

Q: What is animal chiropractic?
A: Chiropractic care works well with medicine, surgery and other treatment varieties to help bring our animals the most well-rounded care. The spinal column is closely related to the
nervous system, so it can help treat a variety of issues that have to do with the nervous and spinal systems. All body systems have some sort of a connection with the nervous system.
Chiropractic care can restore and preserve the health of the animal. The adjustment is defined as a very specific, short lever, high velocity, low amplitude, controlled thrust that can
correct vertebral subluxation complexes.

Q:What species do you treat?
A: I treat cats, dogs, horses, cattle, pigs, etc.  Anything that is an animal, I can probably attempt to adjust. 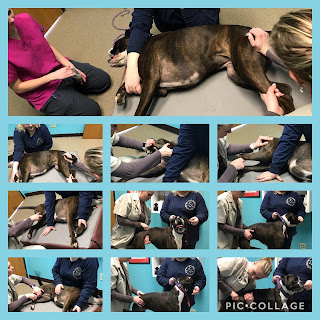